Intravascular ultrasound (IVUS) is a medical imaging methodology using a specially designed catheter with a miniaturized ultrasound probe attached to the patient end of the catheter with the other end attached to computerized ultrasound equipment. The end with the probe is inserted through an IV in the leg and directed into the pelvic veins of interest. IVUS allows for examination of the veins from within to check for obstructions. Precise localization and accurate measurement of the severity of the vein narrowing is possible with IVUS.  Although stent technology and IVUS have been used for years in other vascular beds, the use of them together to investigate the pelvic veins is new and exciting in that many desperate vein patients as well as patients with undiagnosed pelvic and buttock pain previously evaluated by their OB/GYN or Pain Management physicians now have the potential of being helped.

The resultant increased lower extremity venous hypertension due to the pelvic venous obstruction from iliac vein compression lesions may lead to significant thigh and leg swelling, failure of previous vein procedures with recurrent varicose veins, skin changes around the lower leg and ankle region and in some cases, non-healing venous ulcers. Patients may complain of left hip, flank or buttock pain, achiness down the posterior thigh into the posterior knee area. Women (and men more infrequently) may present with symptoms and signs of pelvic congestion syndrome, or may have been given the diagnosis of other obscure causes of their pelvic complaints, such as psychogenic pelvic pain or post-partum depression.  IVUS allows precise identification and stratification of these blockages from within the iliac veins. This makes it possible to determine which patients are most likely to benefit significantly from IVUS directed therapy with balloon angioplasty and intravascular stent placement.  Angioplasty (iliac vein venoplasty) stretches the scar tissue while the stent is required to maintain patency as the incidence of recoil and recurrent symptoms is too great without stent placement in this group of patients.

Iliac vein stent placement is most accurately and precisely accomplished with the use of IVUS. Based on the results of the diagnostic IVUS procedure, individualized plans of therapy can be established based on the location and severity of narrowing. IVUS directed stenting of the diseased (compressed or post thrombotic) segments may be performed either at the time of the diagnostic IVUS exam or in a staged fashion at a later date. IVUS is used to measure the severity of the narrowing (by calculating luminal area reduction compared to expected normal areas which yields a specific percentage of narrowing). Upon completion of stent placement and balloon expansion of the stent when needed, IVUS is also used to confirm optimal stent expansion and apposition of the stent to the vessel wall. Once the lumen of the vein is restored to normal (stented) flow through the stented vein may be increased up to 90% depending on the difference between pre and post stent lumen area . This is analogous to a traffic jam on the highway caused by multiple lane closures, which is then relieved immediately once the barriers have been removed 4 lanes of traffic have been restored. Although placing stents in arteries has been performed for 30 years or more, and IVUS has been used in clinical practice in the arteries and veins for the last 10 years, the application of these two technologies, in concert, to evaluate and treat iliac vein compression syndrome and pelvic vein congestion is the most recent and significant advance in the field of phlebology, or vein care. IVUS has changed our approach for treating patients with either first time or recurrent venous insufficiency whose lower extremity venous insufficiency ultrasounds may not match their clinical severity. It is this group of patients who are most likely to benefit from further iliac vein assessment with intravascular ultrasound to determine whether they might be candidates for iliac vein stent placement. 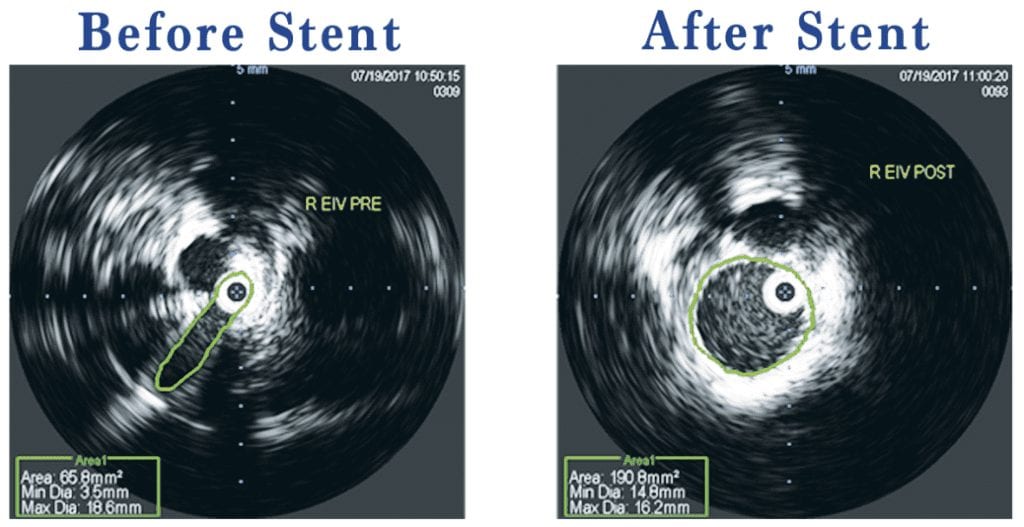 Under IVUS direction, we can now treat disease previously not recognised or appreciated. Stents can be sized accurately and post deployment expansion can be confirmed with IVUS.